2. Pesticide levels on food unknown due to poor government testing.

4. The San Jacinto River waste pits unleashed toxics into the river and, residents say, their bodies.

6. The Amish: Makers of jam, fine cabinetry, and polluted rivers.

9. Where do fracking fluids go? Scientists create the first detector.

11. OK given to restart nuclear plant in Japan.

18. Exide ordered to clean up homes tainted by battery plant. 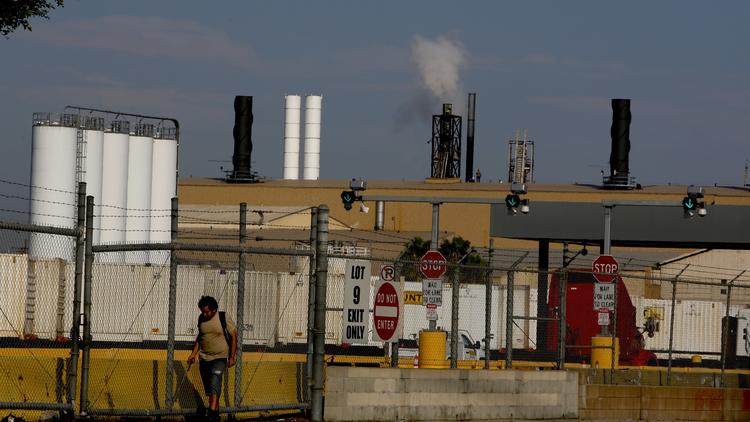 MOSCOW — Five members of a banned militant group were arrested in southern Russia on Saturday and a homemade bomb packed with shrapnel was defused, in another security scare weeks before the Winter Olympics in Sochi.

Islamist militants have threatened to attack the games and suicide bombers killed at least 34 people last month in Volgograd, also in southern Russia.

President Vladimir Putin, who has staked his political and personal prestige on the success of the Olympics, has ordered safety measures beefed up nationwide after the attacks.

Russia’s National Anti-terrorism Committee (NAC) said the latest arrests were in Nalchik, a town about 190 miles from Sochi in the Caucasus region, where insurgents want to carve out an Islamic state.

“Security forces have detained five members of a banned international terrorist organization,” the NAC said in a statement received by Russian news agencies. An NAC spokesman confirmed the statement to Reuters.

“The anti-terrorism operation discovered and seized ammunition, grenades and a homemade explosive device packed with shrapnel ready for use,” the statement said.

The weapons were discovered in the course of searching the addresses where the arrests took place, it added.

Nalchik is 62 miles from the town of Beslan, the site of a 2004 guerrilla attack on a school which killed 331, half of them children.

Russian Pavel Pechyonkin, a 26-year-old former paramedic who allegedly converted to radical Islam in 2011, has been named by police as a suspect in the first bombing that hit Volgograd’s train station. NBC’s Jim Maceda reports.

An Islamist group in the region, the Caucasus Emirate, led by a former Chechen independence guerrilla commander, Doku Umarov, has urged militants to use “maximum force” to prevent the games, which open on February 7, from going ahead.

Putin crushed separatists in the Muslim province of Chechnya when he rose to power 14 years ago. But the Islamist insurgency spread to neighboring Dagestan, recruiting fighters from as far afield as Canada.

On Thursday police went on combat alert in the Stavropol region, also in the south, after the discovery of at least five corpses with gunshot wounds and an explosive device.

The head of Russia’s Olympic Committee has said Moscow has taken every possible measure to ensure the safety of the games.

Russian forces went on combat alert last week in Sochi and about 37,000 personnel are now in place to provide security at the games.

Video: US Olympic CEO: Russian bombings have ‘our attention’

Scott Blackmun, CEO of the U.S. Olympic Committee, tells TODAY’s Matt Lauer that in the wake of recent bombings in Russia, he is “concerned,” but has confidence in security measures for the Games.

MOSCOW – Two jailed members of the punk band Pussy Riot will be freed under an amnesty that will also see the release of 30 environmental activists, Russian President Vladimir Putin said on Thursday, eliminating two points of tension with the West as the country gets set to host the Winter Olympics.

In a surprise move, Putin also pledged to free one of his most prominent foes, oil tycoon Mikhail Khodorkovsky, who has spent a decade in jail after falling out with the Russian leader.

“I feel sorry for Pussy Riot not for the fact that they were jailed, but for disgraceful behavior that has degraded the image of women,” Putin said during his annual and wide-ranging televised news conference.

Pussy Riot’s Nadezhda Tolokonnikova, 24, and Maria Alyokhina, 25, who are serving a two-year sentences for a crude “punk prayer” against Putin and the Russian Orthodox church in Moscow’s main cathedral had been due for release in March but are now expected to be freed sooner under the amnesty.

Thirty people detained in a Greenpeace protest against Arctic drilling will avoid trial, and

Putin also described Edward Snowden, as “noble,” but denied he had never met or worked with the NSA leaker who has been given asylum Russia.

“Thanks to Mr. Snowden, a lot has changed in the minds of people around the world,” Putin added. “We don’t help him – we just gave him temporary asylum.”

Putin also said Russia’s economic deal with Ukraine, announced Tuesday, was motivated by “brotherhood” rather than political hostility to Europe.

“This has nothing to do with Maidan [protests in Kiev] or the European Union, we just see that Ukraine is in trouble and we want to help them,” he said. “We must act like close relatives and help this nation.”

He added that Moscow did not oppose Kiev signing a trade deal with Europe as long as it did not harm Russia’s economy.

Putin also mounted a defense of his often anti-Western rhetoric. “It’s important for me to protect our values for our citizens,” he said, adding that he was protecting Russians from those “that are trying to aggressively dictate their values.”

He also said no decision had been made on whether to deploy missiles in Kaliningrad – its westernmost outpost, between Poland and Lithuania – a move that has caused concern in Washington.

For the first time since 2000, the U.S. delegation to an Olympics will not include a member of the first family, a vice president, or former president. NBC’s Chuck Todd reports.

“But let no one worry – we have not done this yet,” the president said, adding that it would be a way of countering the U.S.-led missile defense system based in Eastern Europe.

There was also a political slap-down for his former president and current prime minister, Dmitry Medvedev.

When asked who is “number two” in Russian politics, Putin replied: “You really have put me in a difficult situation…” before going on to name Communist Gennady Zyuganov and right winger Vladimir Zhirinovsky ahead of Medvedev.