A Kenyan woman’s hands were butchered and she was left with injuries to her head after she was brutally attacked by her husband, who blamed her for not being able to conceive any children during their seven-year marriage

The target of one of two U.S. counterterrorism raids over the weekend was a Kenyan terror suspect wanted in a plot to attack the parliament building and U.N. headquarters in Nairobi, but the mission to capture him, in Somalia, had to be aborted.
His face has never been seen by the public but he goes by the name Ikrimah and he is a senior planner for the Somali terrorist group known as al-Shabab. He will now also be known as the one who got away from SEAL Team Six, which failed to capture him in a pre-dawn raid.

Kenya president: Mall attack is over

Multiple barrages of gunfire erupted Sunday morning from inside the building where there is a hostage standoff with Islamic extremists nearly 24 hours after they attacked using grenades and assault rifles. 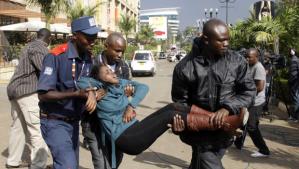 About 10 to 15 al Qaeda-linked militants holed up in upscale mall in Nairobi, shooting at police; number of hostages unclear
Read more on the story here – http://www.cbsnews.com/8301-202_162-57604047/kenya-westgate-mall-hostage-standoff-continues-59-dead-so-far-minister-says/