“Beauty of the Nile” may have had ancient makeover 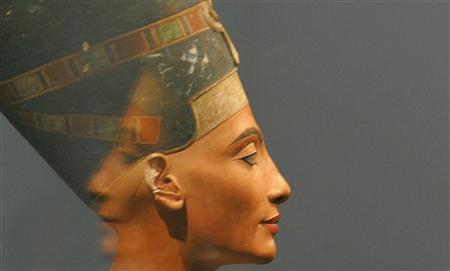 Statue is part of art exhibit

WELLESLEY, Mass. — A remarkably lifelike sculpture of a man sleepwalking in nothing but his underpants has made some Wellesley College students a bit uncomfortable, but the president of the prestigious women’s school says that’s all part of the intellectual process.

The sculpture entitled “Sleepwalker” of a man in an eyes-closed, zombie-like trance is part of an exhibit by sculptor Tony Matelli at the college’s Davis Museum. It was placed at a busy area of campus on Monday, a few days before the official opening of the exhibit, and prompted an online student petition to have it removed.

The sculpture is a “source of apprehension, fear, and triggering thoughts regarding sexual assault” for many, according to the petition, which had nearly 300 signees on Wednesday.

The petition started by junior Zoe Magid called on President H. Kim Bottomly to have the artwork removed.

That appeared unlikely, according to a joint statement issued Wednesday by Bottomly and museum Director Lisa Fischman.

“The very best works of art have the power to stimulate deeply personal emotions and to provoke unexpected new ideas, and this sculpture is no exception,” the statement said. The sculpture “has started an impassioned conversation about art, gender, sexuality and individual experience, both on campus and on social media.”

The sculpture was placed outdoors specifically to get a reaction and to connect the indoor exhibition with the world beyond, Fischman said.

Reaction from the campus community was mixed.

Freshman Bridget Schreiner told The Boston Globe she was “freaked out” the first time she saw the sculpture, thinking for a moment that a real, nearly naked man was lingering on campus.

“This could be a trigger for students who have experienced sexual assault,” she said.

Others were more understanding.

“I find it disturbing, but in a good way,” English professor Sarah Wall-Randell said. “I think it’s meant to be off-putting. It’s a schlumpy guy in underpants in an all-women environment.”

A Must See Event

The world-renowned exhibit makes a stop on the second floor of Quincy Market, offering an intensive peek inside the human body—and also paying tribute to the Red Sox and Bruins.